Every year, malaria continues to cause severe morbidity and mortality. Therefore, scientists are actively collaborating with the World Health Organization towards an eradication of the disease. One of the main pillars of the eradication agenda involves killing the transmissible forms of the parasite that causes malaria, using drugs. This will, in turn, curtail the spread of the disease. However, there is a lack of compounds that can kill the transmissible form of the parasite. This blog post underlines that natural products might hold the key towards discovering the needed transmission-blocking compounds and calls for their joint exploration. Indeed, the historical link between natural compounds and the battle against malaria supports this argument. 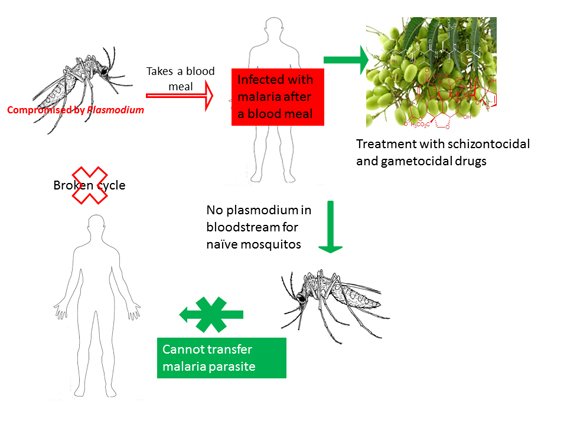 Figure 1: Stopping the spread of Plasmodium from infected humans to mosquitoes will eradicate malaria.

Every once in a while, in Science as in other fields, an idea is proposed that has the potential to become a game changer. Malaria chemotherapy has traditionally focused on treating the disease. Most antimalarial drugs (estimated 90%) in use only kill the parasites that cause the disease during the asexual bloodstream stage of its life cycle. This is not surprising since all dangerous, and sometimes fatal clinical manifestations of the disease appear at this stage when the parasite rapidly consumes the host’s red blood cells. But, not all the parasites are killed at this stage because some of them transform into sexual forms (called gametocytes) that escape these drugs. Now, scientists are shifting their focus towards targeting the parasite during the sexual stages of its life cycle. This is significant because malaria can only perpetuate when sexual forms of the parasite are taken up by naïve mosquitoes that pass it on to the next unfortunate victim(s).

Malaria is a parasitic infectious disease that is transmitted by Plasmodium-infected female Anopheles mosquitoes. In humans, the disease is caused by Plasmodium malariae, P. ovale, P. vivax, and P. falciparum. The most virulent form of the disease is caused by P. falciparum. The monkey malaria parasite, P. knowlesi, which is often misidentified as P. malariae, is now recognized as widely distributed in humans and potentially life-threatening (1).

Before 2010, malaria was responsible for the death of millions of people annually. Thankfully, malaria-related mortality consistently declined from 2010 to just over 430 000 in 2015 and 2016, most of it in children under five and pregnant women. Worryingly, there appears to be a reversal (in some regions) or leveling off of this decline as the world malaria report for 2017 shows (2). The consistent reduction in malaria incidence rates led to new thinking about combating the disease. What if malaria could be eradicated? And what will be the role of chemotherapy in this eradication agenda?

To eradicate malaria, the sustained transmission of the causative Plasmodium parasite between humans must be stopped. Traditionally, attempts to achieve this aim have focused on preventing mosquitoes from biting people, through vector control measures such as using insecticide-treated nets. After all, sporozoites (parasite forms that infect humans after a bite from an infected mosquito) cannot spread if people do not get bitten by mosquitoes. Among the flaws in this strategy is that the parasite itself is not targeted, which means that it can still spread given the right circumstances. But, blocking the transmission of parasite gametocytes (sexual blood stage parasite forms ingested by mosquitoes) to naïve mosquitoes represents a more promising target for curtailing the spread of the parasite (Figure 1). This is because gametocytes could be more easily targeted and killed within the human bloodstream (3). There are still considerable challenges in targeting gametocytes, not least of which is our limited understanding of gametocyte biology and the small number of compounds with activity against sexual stage parasites. As yet, Primaquine is the only approved gametocidal drug.  And compared to compounds with activity against asexual blood stage parasites (schizontocidal compounds), the number of gametocidal compounds is inadequate. This is not for lack of trying, but perhaps we have been looking in the wrong places.

Extracts from various parts of Azadirachta indica (neem tree) are used to treat fever, including malaria in endemic countries. Phytochemicals present in these extracts including limonoids, which are a class of highly oxygenated terpenoids, are credited for its efficacy. Several studies have demonstrated the in vitro efficacy of neem seed, leaf, and bark extracts against asexual blood stage P. falciparum parasites. Two limonoids, gedunin and nimbolide, were found to be the most active neem constituents against asexual blood stage parasites (4, 5).

The seed and leaf extracts of neem have also shown gametocidal activity in vitro and in vivo. In fact, Udeinya et al. (6) demonstrated that in vitro, a 2.5 µg/mL neem leaf extract killed 90% of mature and immature P. falciparum gametocytes. Another limonoid, azadirachtin, which is present in neem leaf and particularly abundant in the seed, has been credited with this interesting activity. The efficacy of standardized azadirachtin enriched neem extract (NeemAzal®) on gametocyte stages developing in mosquito was subsequently demonstrated by Lucantoni et al. (7). In their study, they found that healthy mice were not infected when bitten by mosquitoes which took a blood meal from gametocytaemic mice that have been treated with an azadirachtin dose of 50 mg/kg/body weight. Control mosquitos that were fed with the blood of untreated mice transmitted the parasite. Thus, the development of Plasmodium parasite was blocked when sexual stage parasites were ingested by mosquitoes taking a blood meal from NeemAzal®-treated mice. This transmission-blocking activity of NeemAzal® has been replicated at an even lower concentration using field isolate of parasite ex vivo (8).

LaMonte and co-workers also demonstrated the transmission blocking ability of carmaphycin B, a tripeptide which was isolated from an extract of the cyanobacterium Symploca sp. obtained from the Dutch Carribean island of Curaçao. Carmaphycin B is a potent inhibitor of sexual and asexual blood stage forms of Plasmodium. Besides, it also showed prophylactic ability by killing liver stage parasites. Because carmaphycin B was toxic tohealthyl cells, the researchers made some chemical modifications to its structure that reduced the toxicity while retaining the parasite killing ability (9). This natural product of microbial origin might even fit the profile of the ‘’magic bullet’’ antimalarial drug because it is equally potent against multiple stages of the parasite life cycle.

What the preceding two examples show, is the great potential that natural products, as extracts and purified compounds, hold towards discovering transmission-blocking agents. The complex molecular structure of natural products potentially constitutes an advantage that allows superior protein binding interactions. This comparative advantage should be exploited in the search for compounds with transmission-blocking ability.

*Nasir Tajuddeen is affiliated with the School of Chemistry and Physics, University of KwaZulu-Natal, Pietermaritzburg, South Africa

This is indeed what the world has been waiting for. A new approach on tackling malaria. It has always been on how a drug weather synthesized or isolated from natural products will kill the parasites, and the parasites have the ability to develop resistance to the drugs, and also it changes sexual form when the drug is administered, so many parasites excape the drug and subsequently transferred to another victim. If a drug from natural product can kill the parasites and terminate the cycle preventing its transmission to the next person. Then I can say this is a break through… Read more »

Great work! By this research, I am so looking forward to a world free of malaria…

The current thinking of transmission blocking antimalarial agents is really appealing to scientists and although natural products may not directly provide very specific and selective gametocidal agents, but would certainly provide template(s) from which such agents could be developed. This article certainly points to the write direction. Kudos to the writer

This comprehensive approach to malaria is commendable and one that holds exciting prospects for global public health. If successful, it will be able to cure malaria, deny the parasites any sanctuaries inside the human body and flush them out of our system. This is a great addition to knowledge and a step towards a malaria free world.

I will be interested to know if there is a “taskforce” focusing on this aspect of malaria control. It sure seem a promising approach. It is actually surprising to see how little attention targeting the gametocytes received compared to other life cycles. As well, there is (may be?) the need to develop robust assays for the screening of gametocidal activity of natural products alongside testing them against the parasite.